Friedrich Ebert Stiftung office in Prishtina, Kosovo, Spirit of Football (SoF) and Federation of Football in Kosovo are organizing a special event 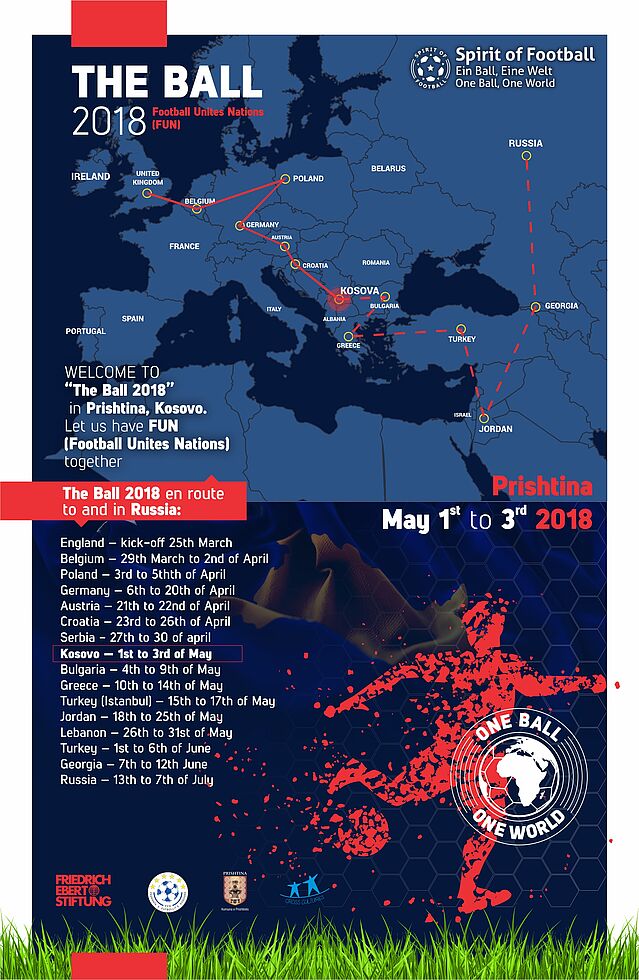 Spirit of Football (SoF) – a non-profit organization harnessing the power of football to drive social change – has developed “One Ball, One World” a unique workshop methodology to empower people with the skills they need to flourish on and off the pitch.
The Ball 2018 will kick off its 5th World Cup journey on March 25th 2018 from Battersea Park in London, where the first official game of football was played, and travel through France, Belgium, Germany, Austria, Croatia, Bosnia, Bulgaria, Kosovo, Greece, Turkey, Jordan, Lebanon, Georgia and ends in Russia in time for the 2018 FIFA World Cup in June. Collaboration with project partners will ensure that The Ball 2018 leaves a lasting legacy and extends the impact of the World Cup beyond the borders of the host country, Russia.

The Ball 2018, a fair trade ball, was fairly produced in Pakistan in November 2017. It was officially unveiled on December 5th 2017 by German President Frank Walter Steinmeier, who became the first and only person so far to sign it. The Journey of “The Ball 2018” ends in Russia in (June 2018). The Journey starts in London (March 25. 2018)

The workshop in Kosovo is part of the series of workshops to be organized in the planned route across European countries, including the Balkan region, where Prishtina will be the host city for youngsters from Kosovo, Macedonia, Albania, Serbia.
The workshop using this methodology addresses a range of topics, including integration, inclusion, social integration and cohesion, women’s empowerment, innovative problem-solving and peace building.
Using innovative interactive cross-cultural learning, team building and fair-play methodologies, participants will learn how to build capacity in mediation, conflict resolution, and negotiation to engage with other people from other cultures and then take skills learned to engage people in their communities of all backgrounds.