The office of the Friedrich-Ebert-Stiftung in Prishtina was set up in the difficult political circumstances of the years 1999 and 2000. After the NATO intervention in spring 1999, the United Nations Resolution 1244 authorised an international civil and military presence in Kosovo. Local democratic structures were meant to be established on a step by step basis. With its experience, the FES in Prishtina is contributing to this process of strengthening democracy and good governance in Kosovo.

Founded officially in June 2000, the Prishtina Office had to cope with considerable challenges, such as the contrasting views of the main ethnic groups concerning Kosovo’s political status. One of FES’s major aims has therefore always been to ensure active participation of all ethnic groups in Kosovo in order to establish a democratic system. Since day one, the Prishtina Office was committed to strengthening civil society organisations by working with partners from government institutions, trade unions and employers’ organisations, research institutes and the media.

Its mandate being political education and consultancy, the Prishtina Office organises conferences, provides a platform for discussion and supports political research in order to create a vibrant democratic society and develop local democratic structures. After the declaration of independence on 17th February 2008, Kosovo is still facing notable economic and social challenges: the performance of Kosovo's rule of law institutions is still poor, the economic situation remains difficult and democratic structures and processes are still too weak.

Today, the office of the FES in Prishtina is active in

The Friedrich-Ebert-Stiftung in its work is guided by the basic values of social democracy: freedom, justice, solidarity and international cooperation. The aim of FES Prishtina is to offer the Kosovar society an understanding of democratic processes such as political party development, fair elections and active citizenship.This is to be achieved through the various projects and activities implemented in Kosovo with the cooperation of our local and international partners. Activities are planned and held in cooperation with our partner organisations. FES offers in the first place national, regional and international workshops, seminars and conferences, research studies, political analysis, publications, as well as exchange programmes.

The main focus of our work 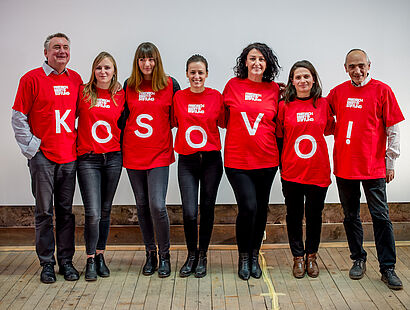 The Kosovo Office of the Friedrich-Ebert-Stiftung regularly offers internships. More